The last TF2 LAN in North America was almost three years ago. Finally, after two years of a global pandemic, we have arrived here at Localhost in Fullerton, California. 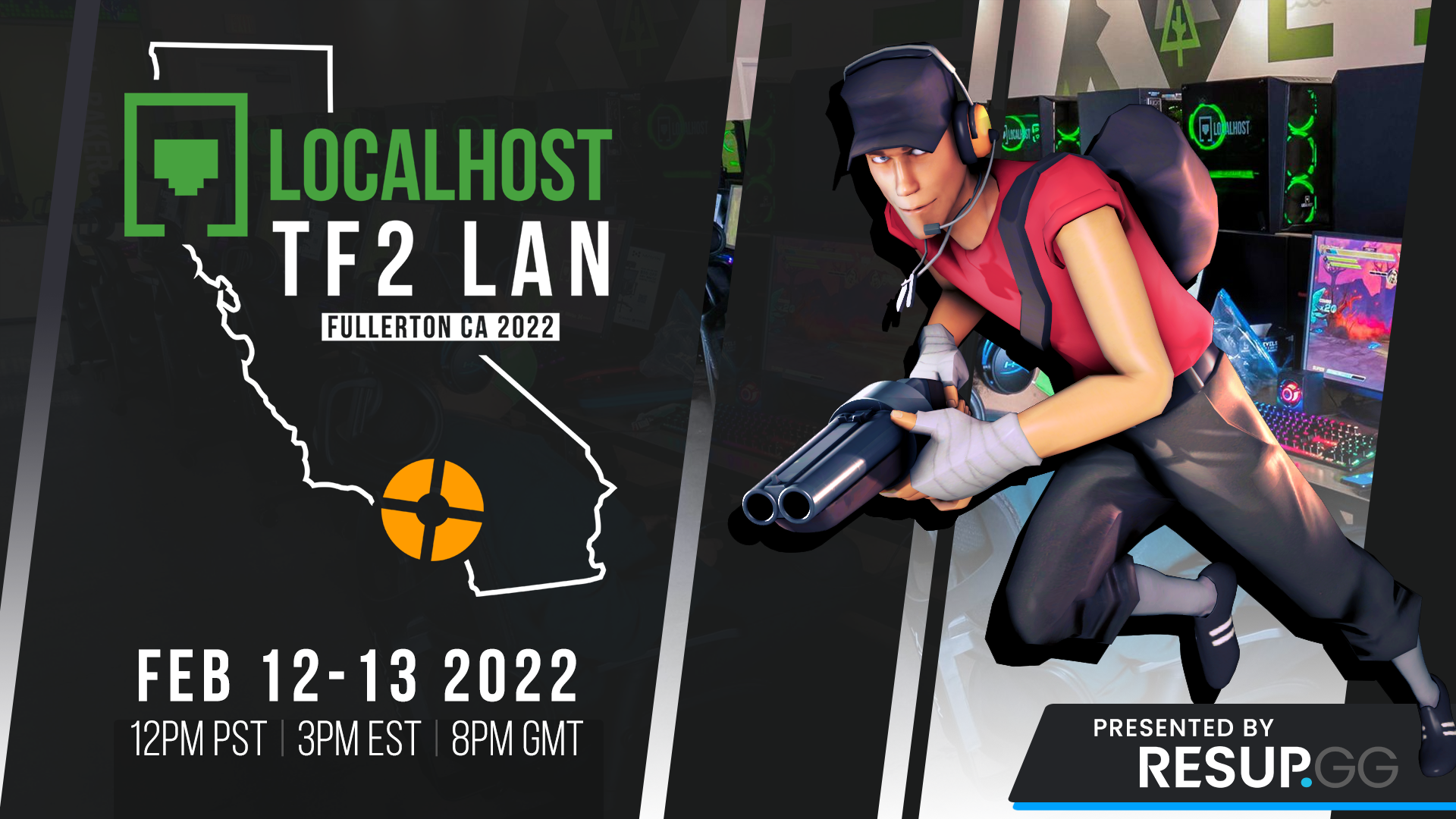 LAN steps on American soil once again. (Graphic by Raos)

The Localhost LAN came to fruition in response to the cancellation of DreamHack Anaheim, where TF2 was slated to make its NA LAN comeback. Many people had committed to flights, accommodations, and holidays to attend the event. Coincided with the opening of the Localhost venue, the LAN was born.

There will be a best-of-one swiss stage, with 5 of the 8 teams advancing to the double-elimination bracket alongside the 3 teams seeded directly through to playoffs. During the playoffs, the first two rounds of the upper-bracket and the first round of the lower-bracket will be played as best-of-one. The bracket will then continue as best-of-three until the best-of-five grand final.

The event will use RGL’s Season 8 Invite map pool, consisting of:

The 11 competing teams are composed of players new and old, from first time LAN competitors to seasoned LAN veterans. The following teams will be competing in the tournament:

For more information on rosters, check out the Liquipedia page created by alfredodan and nyna.

The tournament opens at 11AM PST on Saturday and Sunday and will run until 10PM PST.

All times in PST

With up to four matches live at one time we've brought out the big guns. For TFTV & KritzKast, the following talent will be covering the event:

We'll be covering all ends of LAN with three networks bringing you live coverage. You will be able to watch it on b4nny’s Twitch channel, TeamFortressTV, and KritzKast.

Want to be part of this event? You can still donate to the prize pool at http://donate.resup.gg. Also, consider checking out RESUP LAN merch. Proceeds also contribute to the prize pool. That can be found here: http://shop.resup.gg/

For anyone interested (as I was), rosters are up on liquipedia: https://liquipedia.net/teamfortress/Localhost_Fullerton_LAN_2022

For anyone interested (as I was), rosters are up on liquipedia: https://liquipedia.net/teamfortress/Localhost_Fullerton_LAN_2022
posted 3 months ago
quote • multi-quote • link
2
#2
eddiiee
7 Frags – +

Very helpful, thanks for making this

LETS FUCKING GO LAN IS BACK

if trip vs soapy doesnt happen i will be very very sad
posted 3 months ago
quote • multi-quote • link
6
#6
Zesty
32 Frags – +
WhipFor anyone interested (as I was), rosters are up on liquipedia: https://liquipedia.net/teamfortress/Localhost_Fullerton_LAN_2022

Sorry I will not be able to attend I am currently embroiled in a defamation case with liquipedia.

[quote=Whip]For anyone interested (as I was), rosters are up on liquipedia: https://liquipedia.net/teamfortress/Localhost_Fullerton_LAN_2022[/quote]

[img]https://i.imgur.com/44x91by.png[/img]
Sorry I will not be able to attend I am currently embroiled in a defamation case with liquipedia.
posted 3 months ago
quote • multi-quote • link
7
#7
Joe_Shroe
-1 Frags – +